On February 20, 1997, Paige Patterson, then president of Southeastern Baptist Theological Seminary, delivered the following keynote address to the Association of Christian Schools International’s 5 Star Teachers Convention in Birmingham, Alabama. Addressing the problems associated with the declining quality of the American education system, Patterson provides a solution through an exposition of Deuteronomy 6:1-12. 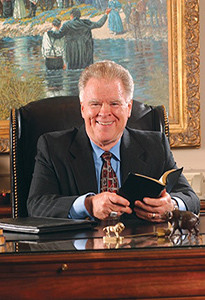 As the eighth president of Southwestern Baptist Theological Seminary, Paige Patterson has four decades of experience in educating pastors and missionaries. After almost 18 years as president of The Criswell College in Dallas, he served for 11 years as president of Southeastern Baptist Theological Seminary in Wake Forest, North Carolina, before his decade at Southwestern. Even as a pastor he offered instruction in Greek and biblical studies to his parishioners. The focus of Dr. Patterson’s leadership is an intense commitment to evangelism and the task of global missions with a foundational component of demanding research and rigorous academic preparation.